The Return of Git Boy 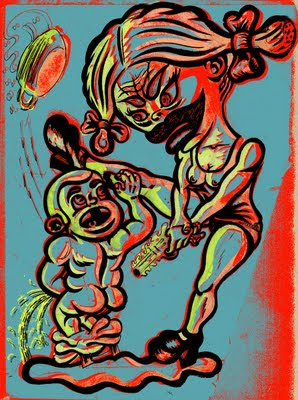 I’ve recently enrolled on a short course in children’s book illustration with the brilliant and inspirational Rebecca Elliott. Illustrating a book for kids has been at the back of my mind ever since I first thought of going to art college. When I was growing up some of my strongest visual impressions of the outside world were from the books and pictures of artists like Edward Ardizzone, Charles Keeping, Thomas Henry and Pauline Baynes. Even as a young artist my idealised old age was as an elderly illustrator of slightly subversive children’s books pottering about his cottage garden like Ernest Shephard or Alfred Bestall.

I think there’s an impression that writing and drawing for children is somehow ‘easy’. That makes me think of the kind of people that used to say to my brother Matt: “why don’t you just write a hit record?” as though it were something that you could just knock off in an afternoon whenever you felt like it. There is a scrupulous art to writing and designing a good children’s book. Whether it is too exact a science for me remains to be seen...

But the search for stories has prompted me to prise open the old ‘pending’ drawer in my plan-chest, blow off the dust and revisit some older projects that never made it into the sunlight.

Here’s one from the early 1990's called ‘Git-Boy’. I was inspired, I think, by tabloid reports of some feral child up north called ‘Rat-boy’ who had compiled a jaw-dropping list of minor offences in a very short life. I re-imagined him as a sort of ‘Baby Crockett’ figure. In fact his first working name was ‘Baby Fukett’ (yes I know but this was then and it seemed the apogee of ‘dark & edgy’ wit to be sweary). For a while he became ‘Naughty Boy - the Little Pudding of Hatred’. Then someone I knew, otherwise very reputable, bought a car with a numberplate that went GT 8OY or something so obviously he became known (to us) as ‘Git Boy’ (to much hilarity) and I also thought it a perfect fit for my nascent character. 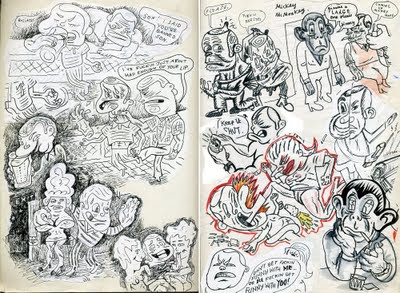 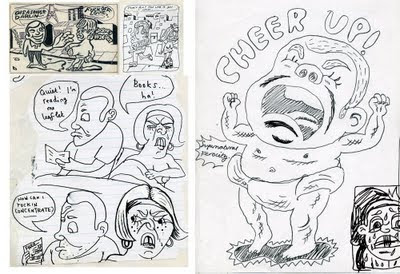 These are obviously just rough first layouts but they show the way I had begun to work - and still do - producing lots of small drawings (doodles often) and collaging them together to create some sort of narrative.

The stories - as far as they went (and they didn’t go far) - involved Gitsy (sometimes he was a small boy, other times a baby in a nappy) variously drinking, drug dealing, fighting and stealing, trying to have relationships with older women and generally feeling very fed up with his lot. I’d recently been enormously impressed by Jim Cartwright and Alan Clarke’s film Road and I think you can see the influence of that here. The male figures are generally feckless, depressed alcoholics. the women tearful and hard done by. It was determinedly violent and antisocial, urban (the back streets and wastelands of Bethnal Green I think were my model) and despondent. Perhaps it wouldn’t have made a very suitable children’s book.

By way of a theme tune I think only this man comes close to a musical equivalent of what I wanted to do with Git-Boy. I love this song (and it might interest you to know that the dark-haired girl on keyboards is now the pain medicine consultant at my local hospital. Lord, how time does fly!)
Posted by A. at Sunday, July 03, 2011