Me and Bobby Moore... 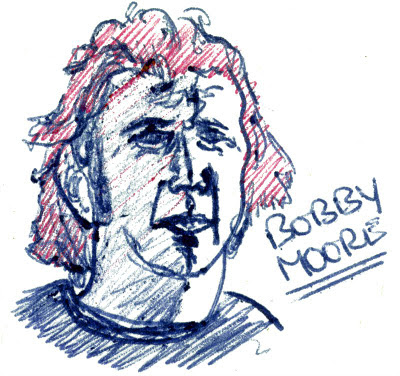 I’m not a great lover of football anymore. I watch the occasional big game on tv and I still follow West Ham’s results in that Pavlovian saturday afternoon knee-jerk manner. And of course it remains a sort of lingua franca between men all around the world. But it’s changed a lot since I was a regular matchgoer. The strange middle-class-isation of the sport in the eighties and the influx of grotesque amounts of money (largely from Murdoch’s Sky project) have not been completely beneficial as far as I’m concerned. Last year I was saddened to read of the premature death of Bobby Moore’s son and it made me reflect on a little period of my life that once seemed so intense.

When I was small I would draw footballers incessantly. In fact for one phase that’s all I would draw. My Mum got a bit concerned I think and once said to me “I think you need a rest from footballers, draw something different”. But for 10 year old me there was nothing else ... 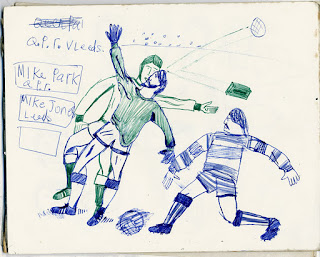 I suppose the brick reflects the new hooligan fashion of those days. 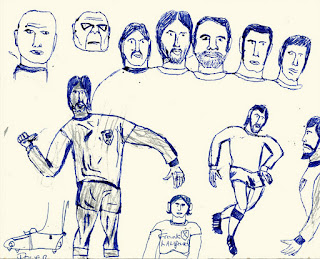 Oh look - it's the original Frank Lampard looking remarkably like his son! 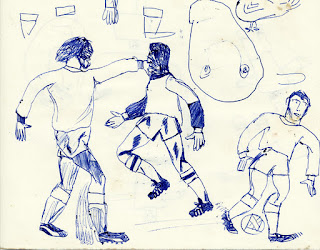 I was actually born nearer to White Hart Lane than Upton Park (I only realised this when it was far too late), but we moved to Stratford in 1962. WHU won the F.A. Cup in '64, the European Cup Winners Cup in '65 and, as everybody knows, the 1966 World Cup. How could any little boy not want to grow up to be Bobby Moore? 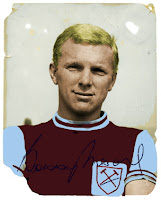 I was going to say I saw him play hundreds of times but that can’t be true. But it must have been scores and scores of games. In truth, he’d often have an indifferent match. He had a relaxed, nonchalent way with him but also some sort of star charisma that made him stand out from his team-mates (younger readers: think Beckham). When he ran from the tunnel (strolled would perhaps be more apt), he somehow appeared luminescent, the vibrant claret and blue and his blond curly hair catching the light. Six feet tall but he seemed bigger and had a natural authority that couldn’t help but reassure you. His play was always graceful, at times almost without effort. He never had the volatile saturnine edge of George Best, Bobby seemed more wholesome, but also good and kind and you instinctively felt that with Bob in charge of defence everything would turn out okay.

My Dad got to meet him a couple of times and said he appeared almost shy and lacking in confidence in real life. He certainly liked a drink. And he had an eye for the girls. And if he’d had the freedom of contract of today’s players he'd probably never have stayed at Upton Park (He wanted to go to Spurs at one point, but the old WH board wouldn’t wear it - instead they brought his mate Jimmy Greaves to UP).

Although I have photos inscribed to me from Bob I never did meet him face to face. The photo below is the closest I got... 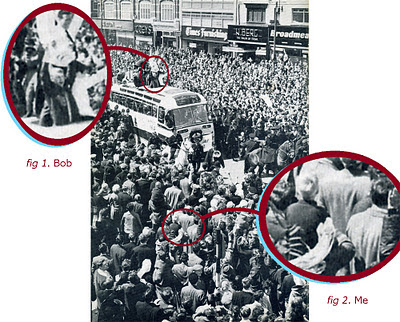 This remarkable image appears in Bobby’s first ‘autobiography’ (Bobby Moore - My Soccer Story). It’s taken in Stratford Broadway, E.15, from outside Newham Town Hall. It’s 1964. Bob himself is holding the cup aloft on the coach, but... wait for it... below him in the crowd is ME (very blonde hair) on the shoulders of my uncle Kenny. Also there is my younger brother Matthew (pea jacket) astride my Dad and also my Grandad Charlie and Great Uncle John. I had been watching from the roof of The Puddings for hours waiting for the coach to arrive. Then when it did, my Dad and Kenny grabbed me and my brother and waded into the crowd to get us a closer look.

It remains quite clear as a memory. I remember how bizarre it seemed that grown men were sitting on top of traffic lights. Normal rules seemed suspended and anything appeared suddenly permissible. West Ham were on top of the world and everyone seemed so happy. And that’s how you begin a lifetime of footballing disappointment....