Thomas Leer and The Long Mac 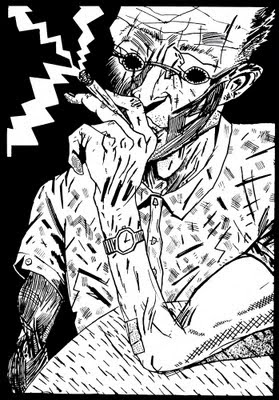 Youth tribes in my young England never remained static. Fashions were always mutating and tastes shifting with the seasons. Styles were never quite as rigid and uniform as some of our latter-day style history gurus would have you believe.

Mods became skins became suedes and smoothies and hippies etc. Punk was no different. One faction took to wearing face-powder and capes and set up camp at the Blitz Rooms in Covent Garden (a former failed attempt at a West End pie & mash shop). But for those of us who didn’t look so good in pantaloons there was the Long Mac. The heavy fustian WW1 greatcoats beloved of the progressive rock hippies were replaced by our lightweight green military raincoats (U.S. preferably). This was where Punk went Prog I guess. No-one danced at Long Mac gigs. You would stand at the back nodding sagely, perhaps taking notes to effect a writerly air. The pockets in the macs were good for wedging paperbacks in so that the title was poking out: Albert Camus was popular, as was The Naked Lunch and Colin Wilson’s The Outsider. And anything with Nietsche's name on. It was all very earnest.

But it created some fantastically innovative music and performances. Cabaret Voltaire, Wire, Throbbing Gristle, Joy Division, The Human League, Soft Cell, The Normal, The The, Robert Rental, Thomas Leer are just the first few that spring to mind.

Thomas Leer is I think one of the great unsung influential figures in music at this time. I’d heard ‘Private Plane’/’International’ over the P.A. at a gig and immediately had to find out who it was. It’s irresistible layers of raw lo-fi synth sounds and almost ethereal, dreamy psychedelia (he had to whisper the vocals to avoid waking up his girlfriend in the bedroom where he recorded) made it quite unlike anything anyone else was doing. Maybe the first and greatest Post-Punk record.

Anyway, I tubed over to Rough Trade on Saturday afternoon and bought it and Robert Rental’s ‘Paralysis’ single. I took them both back to my mate Paul’s house in Epping and we sat up all night playing them over and over again. Sometimes, especially when you are young, you have these little moments where you see with sudden clarity where the future is and you know nothing will be quite the same again. These two home-made records suggested so many possibilities for where music could go next. We sat there chain-smoking Bensons and lifting the arm back to the beginning over and over again as we excitedly outlined a new direction for our own group and weighed up the cost of a Wasp synthesiser. 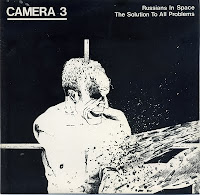 My band never did come up with anything as beguiling as ‘Private Plane’/’International’ . After a year of endless rehearsing, one single and a handful of gigs around Essex supporting our near neighbours Crass and The Poison Girls, I realised that my real love was with drawing and not making music. I got rid of my little P.A. system and went to art college. Over the next few years as The The took off, people often asked me if I regretted not staying with music. And I must admit I sometimes wondered myself. But the truth was I didn’t. I’d had fun but also boredom (b’dum b’dum) and I knew that it wasn’t where my heart lay.

A couple of years later, I had the opportunity to meet Thomas and tell him what a god-like genius I thought he was. He is a modest, quiet, charming Scotsman. We even talked about me doing some cover artwork. But as is the way of these things, it didn’t materialise. But I still often play his music and it sounds as vital now as it did then.