Can You Guess What It Is Yet? 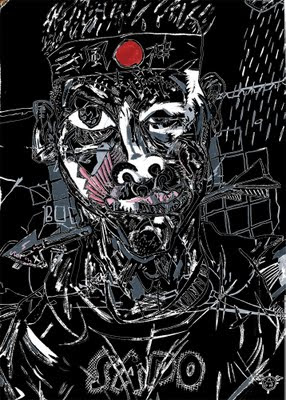 I was lucky enough to meet the great Bruno Richard in Paris in the early 1980’s and overnight became heavily influenced by his transgressive Elles Sont de Sortie project. I began producing lots of stuff like this - I had a strong desire to make an aggressively visceral way of drawing that would in some way mirror the cultural and political atmosphere of that time. You don’t have to listen to too many punk records to sense the frustration in the air at the beginning of that decade. But somehow Thatcher, Murdoch and the corporate state, one way or another managed to marginalise a lot of that feeling. Council house dwellers were enabled to buy their homes and ordinary people were encouraged to buy into the stockmarket as the national utilities were all put up for sale. Amongst the young creative types that I knew, ideology began to give way to the pragmatism of getting onto the property ladder, filing tax returns and filling up that filofax with all those lucrative contacts. I carried on producing ‘angry’ looking artwork for a while but increasingly began to feel looked upon as a quaint but misguided soul. Anger just wasn't cool anymore. It took a while for that to sink in.

Actually I still really like this stuff and can’t understand why I don’t work in this manner nowadays.