"Don't Stand Outside And Be Miserable - Come In And Be Fed Up!" 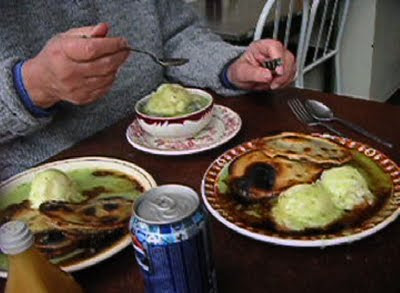 When you are born in the East End of London, there are always certain assumptions made. I actually don’t like jellied eels much. Over the years I’ve tried them every now and again thinking perhaps I’ll finally acquire the elusive ‘taste’ but it’s never happened. Something about the combination of texture and flavour is not appealing to me. Stewed eels are supposed to be a subtler delicacy but I’ve never really taken to them either. When I was a very small boy in Walthamstow, I would play with the little girl from next door. Sometimes she would take me into her flat and I was both horrified and fascinated to see their bath was full of live eels. (Her dad would put them there temporarily before selling them on, but I assumed they were kept there all the time like an aquarium).

Anyway, eels are not for me, but Pie & Mash definitely is. A traditional staple food of the London working classes from at least the Victorian times, to be honest I think you are best introduced to it at a young age. I’ve taken people to my favourite shop a few times but I can tell by their slightly uncomfortable expressions and weakly feigned enthusiasm that it’s not really for them. 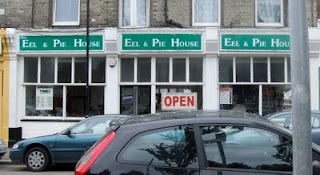 Every East Ender will have his own favourite pie-shop and there will be heated discussions about the qualities of each one. There are better looking shops but my own favourite is the ‘Noted Eel and Pie House’ in Leytonstone High Road. It was originally in Bow but moved to this location about thirty years ago. It always looks as though it opened last week and is likely to close next week. It had the air of a pop-up shop before anyone had coined that term. The cutlery is a jumble of mismatched knives forks and spoons, the tables and benchs of varying heights, some topped with stainless steel, others with marble, all with a big bottle of vinegar and a pot of pepper plonked down. The service hardly ever comes with a smile. I go there regularly with my Dad and we often have a wry laugh that having been regulars all that time we are still treated as though it’s the first time we’ve ever walked through the door! But we keep going back because of the pies. Pie & Mash pies are made in a traditionally slightly secretive way. Somehow steamed underneath and baked on top - they are a combination of crisp and soft pastry with juicy minced beef in gravy - they taste nothing like any sort of pie you would get anywhere else. Three pies and a double scoop of mash doused with a good ladleful of parsley sauce (‘licker’) and plenty of pepper and vinegar. I always have a can of pepsi with mine (this is slightly frowned upon by my old-school father who suggests tea or preferably nothing). This is comfort food of the highest order. I always leave here feeling replete and at ease with the world (and a bit fatter). 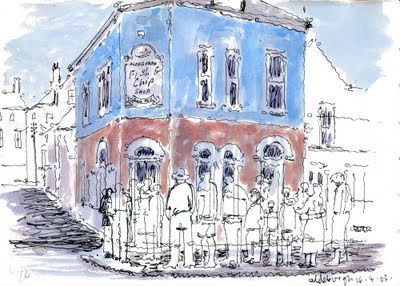 Like pie shops we all have our favourite fish n’ chip plaices. So here’s a drawing of mine. A world away from urban East London it’s in the genteel Suffolk coastal town of Aldeburgh. It’s certainly no secret and sometimes you can queue for three-quarters of an hour but it’s always worth it. The fish are freshly caught in the sea that morning, the golden batter is crisp and barely greasy and the chips are perfectly fried in beef dripping. The ladies behind the counter are always cheerful and super-efficient. And perhaps best of all, you take your hot package through the alleyway and onto the long shingle beach and sit and scoff while watching the north sea rolling in. The seagulls will patiently hover nearby but a word of warning: don’t feed them - there’s now a £1000 fine! Fish and chips don’t get batter than this...

For anyone interested in the history of pies and eels there’s a really good book by Chris Clunn called ‘Eels, Pies and Mash’ with far more information than I can offer here. It may be hard to find now but here are some of Chris’ excellent photographs.
Posted by A. at Saturday, June 25, 2011