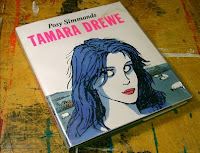 I’m not normally inclined to giving plugs or recommendations here - it would just become endless list-making. But once in a while I’ll make an exception. I stopped reading comics (or graphic novels) a few years ago. Despite, or perhaps because of, the fact that I spent a large part of my teens and twenties reading, collecting, drawing and publishing them, I eventually became a bit bored with the form. It began to seem, even at it’s best, neither fish nor fowl and in that way, always a little unsatisfying (to me).

But Posy Simmonds is a class apart from most comic book illustrators. Her light touch belies a shrewd eye and ear. I marvel at this work. No flashiness or designery cleverness - everything quietly noticed and gently stated. In ‘Tamara Drewe’ she creates a wonderfully detailed and believable world that derives nothing from other comics and everything from just looking at what is actually going on around her. Warm, funny, moving, involving.