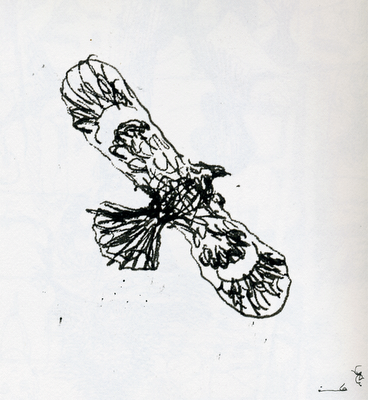 Over the last two years I’ve occasionally seen a large broad-winged bird circling high on the thermals of the wide Suffolk skies near where I live. Now I’m pretty familiar with all the usual suspects, but once in a while you catch something from the corner of your eye and you just think “what was that?” I did once have a camera in the car with me, but by the time I’d pulled over and got the lens on it it was heading for the horizon and could have been anything. Another time, it appeared to hover directly above me and I watched it long enough to be able to grab an envelope and do this little memory sketch shortly afterwards. It’s a Buzzard. They’re more common in the West of Britain, but increasingly they seem to be turning up in the East, apparently swept here by strong winds.
Posted by A. at Wednesday, October 14, 2009